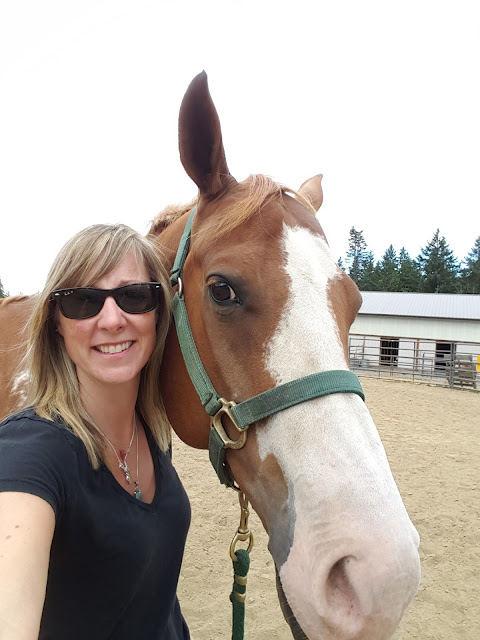 Practicing selfies.  An important skill for any horse that is my partner. 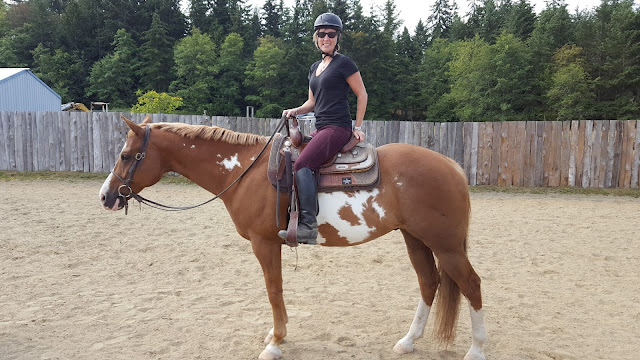 Rocking the english outfit for me and the Western get up for the mystery pony.

I don't want to jinx anything, but this boy has the perfect resume, a handsome face, passed his vet check and is arriving tomorrow for a 'make sure' trial.  Also, I adore his current owner and we both want the same things for the pony.  Lessons scheduled, stall procured and shockingly, I have managed to restrain myself from buying everything in sight since he's a new color AND a new size.

I'd love to hear (or better yet see pictures) from redheaded pony owners about what colors they like best so I can start window shopping.  Keep your fingers crossed that our love affair is real and that the next few days are magical.  Also curious on folks thoughts about x-ray vs. not x-ray.  Vet didn't see any reason to x-ray and he's 10 and has not been pushed hard, gamed or jumped.  Thanks for your thoughts!
Posted by Mona Sterling at 1:44 PM 4 comments:

Looking for a new equine partner is a bit like speed dating.  Except you only get one or two dates before you get married.  What a strange way to make a commitment!

I have lists upon lists of questions to ask, trying to determine if a horse would be a good match for me.  Do they think before they react or do they react and think later?  If your horse was a cartoon character, who would they be?  If someone says Tasmanian Devil, I know we're not a good match.  What kind of home would your HORSE prefer?  I'm surprised at how many owners have been surprised and a bit stumped by this one.  But really, the horse's happiness is important.  I want my new partner to enjoy similar adventures to me.

Then there's the health list.  Colic?  Lameness?  Ever done a blood test or x-rays?

And let's talk about your past.  How long have you had this horse?  Why are you selling?  Has this horse ever bucked you off?  What did you hope to accomplish when you bought this horse?

It's all so personal and detailed.  And it all can fall apart when you meet the horse in person.

Candidate #1 - 16 hand Red Roan solid paint.  Cute as a bug with a long forelock that went almost to his nose.  Seriously, his face was so stinking cute I wanted to chew on it.  7 years old, shown in 4-H and some local breed shows in English and Western.  Quiet, had done some trails.  When I asked the owner what his worst trait was, she said it's that he didn't slow down well for Western.  Ooh!  Sounds like a good fit for a dressage makeover!  Any sickness or lameness?  Nope.  She said he threw a shoe, so he was currently in easyboots on the front because the farrier was out of town.  Not a problem to be ridden though.

In Person -  Still the cutest face and the longest forelock.  First thing I noticed was a bump on his back where the back of the saddle would go.  Owner was young girl and no adults were present.  She had no idea what the bump was, but horse was slightly reactive to it.  Second thing (and this is before horse left stall), he was wearing Easyboots that were two sizes too big.  He also sucked his tongue and had a hard time holding his head still.  Owner tacked up and lunged.  He was a gorgeous mover, but probably would have been more so with boots that fit.  Owner got on and did some walk, trot and canter.  There was lots of hand/rein/bit action to keep his head down.  I got on and threw the reins away.  Horses head went up and he was looking every which way.  I trotted for all of 1 minute and got off.  Thanks, but not thanks.  Without constant direction, he is not confident.  Poor girl kept insisting he was quiet (which he was) and that he wouldn't do anything (not here....but in a year when I let him express himself, I'll bet he's a different horse under all that neurosis), but I said 'he's lovely, but not for me."  Scratch that one.

Candidate #2 - 15.3 hand palomino paint.  Owned by a young girl.  Being sold as girl is in high school and has lost interest.  Has done a little bit of everything, including dressage.  However, horse has been sitting in field for 3 months.  We talked about confidence and she said he was great, though he tried to lay down with her daughter once.  Worst habit was just that he was so quiet.  However, later in the conversation she mentions that she really wishes he didn't do this one thing.  What one thing is that?  Well, he throws his head in the air and strikes out with a front leg and can get a little light in the front end.  He doesn't MEAN anything and he gets over it if you get after him.  Thanks, but no thanks.  I'm not throwing my leg over anything that has tantrums.  Period

Horse shopping is such an exciting adventure.  And one I'm ready to be done with.  And that my family is ready to be done with.  With no horse, I have turned my attention to the house and cleaning out and getting rid of stuff.  I"m like a tornado whirling through the house saying "Do you really NEED this?".  Hopefully, I'll have a new partner soon and we can get back to ignoring the house and barely remembering to do laundry and dishes.
Posted by Mona Sterling at 9:50 AM 3 comments: