Breaking One Thing Leads to Fixing Another

I can't remember the last time I posted.  It was probably back when I had a horse I could ride, but I'm too lazy to check.  So here's the quick version.

January - Enzo feels slightly off.  Give him a few weeks off.  No improvement.

February -Vet comes out and does basic lameness.  Yep, he's lame but it's slight.  Maybe he just pulled something in pasture.  Give the pony a few more weeks off and we'll go from there.

March - Block the right hind leg and find it's in the fetlock.  Even more fun, when the right hind is blocked, he comes up lame on both fronts.  x-rays for everyone!  Nothing on the x-rays.  Next stop, ultrasound!  Inconclusive on the ultrasound. 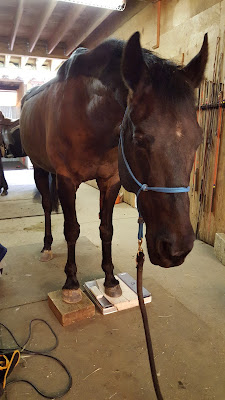 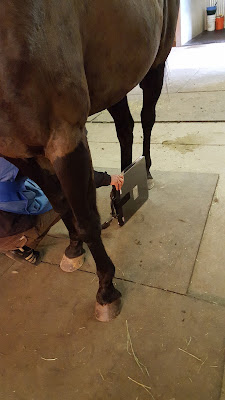 later that day in March - MRI is out of my budget since it starts at $3,000 and I've already spent almost that much on farm calls, x-rays and ultrasounds.  Vet suggests we inject hind fetlock and both fronts and see what happens. 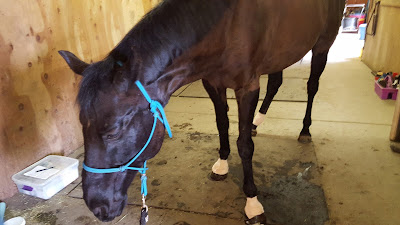 later in March - Front feet look better but rear hind is no better.  Still slightly off.  Best guess without MRI is suspensory ligament in right hind fetlock.  Vet prescribes short course of anti inflammatories and then hand walking, starting at 15 minutes a day and working up to 50 minutes by end of July, at which time we will re-check lameness.  Shockwave therapy is also recommended, but is not in our current budget.  Also, had multiple vets disagree on effectiveness so we do 5-10 minutes of walking on concrete as an alternative.

April - start acupuncture treatments for back soreness and to help with healing. 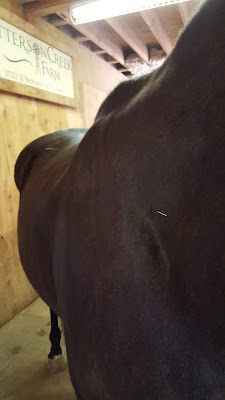 May - up to 30 minutes of hand walking.  Adding on 5 minutes every two weeks. 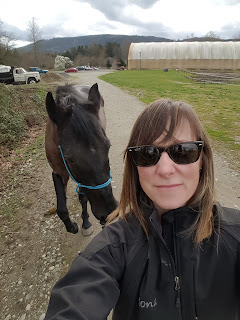 So that's the bad news.  BUT here's the amazing thing.  For almost the last year, my horse has been barely able to be ridden.  I had pretty big anxiety about riding him.  Then I couldn't ride him even if I wanted to and was forced to walk, walk, walk.  I know I said it before, but I can't stress enough that walking with your horse is a goddamn miracle.  Not an instant miracle, but if you're in it for the long game and you want your horse to be more mellow, trust you more, have a better connection under saddle then walking may be right for you.  We haven't done fancy ground work these last six months, just walking.  We walk through the barn aisles, we walk around the property.  We have explored and stood around and done nothing together. We have been startled when a bird flew up from under the bridge we were crossing.  We have watched the other horses at the farm.  We have walked slow and fast.  We have walked side by side or with me in front or with me behind. 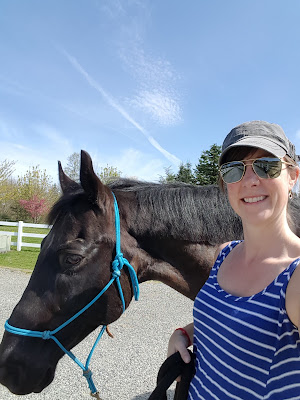 And last week, after Enzo not having been ridden since January I found myself at the barn throwing a bridle and a bareback pad on and hopping on.  We made a lap around the indoor arena, but it was so pretty out and I KNOW Enzo now.  We both wanted to get out in the sunshine.  And so we did.  And as I felt his muscles bunch and smooth out underneath me and after I took a few selfies to prove my bravery, I just tilted my head to the sun and smiled.  This is what horses are about for me.  This bond.  This friendship.  This trust. 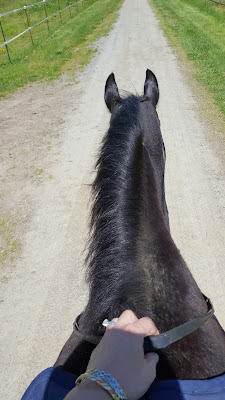 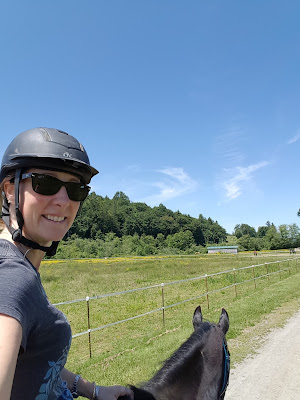 Enzo has gone from shut down to spookier than snot to being happy and mellow and soft.  Notice the ears looking forward.  He's so happy!!

As we head back to work later this summer, I'm looking forward to incorporating this relationship into our working relationship.  It's been such a great reminder that horses are a long game, not a short one.  Horse training from the ground up is slow, simple and kinda boring but damn if it doesn't work.  This break fixed us and I couldn't be happier. 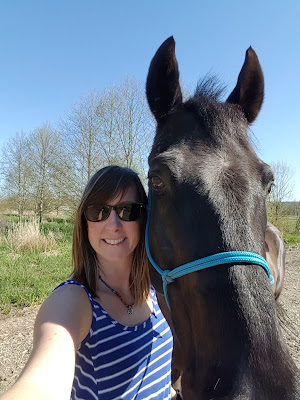