In tarot decks there is a card called The Wheel of Fortune or sometimes just The Wheel.  It depicts the cycles of seasons, the changes of life.  In my life, one cycle has ended.  I know this leaves the door open for a new cycle, but right now I'm just letting things sink in and be what they are.

I don't want to relive the entire thing, so this may be sketchy on details but Enzo collapsed in his paddock.  The vet was called out and he was unable to walk.  His eyes were doing this wobbling kind of thing where they were constantly moving.  I know there's a fancy name for it, but frankly I'm too tired to look it up.  The vet used words such as 'vestibular' and 'neurologic'.  We gave him so anti inflammatories and discussed the situation, deciding what the next course was.

I'll skip over all the agonizing etc. and tell you that 24 hours later there was no change and on a bright, summer day in the shade of a tree and after enjoying a bellyfull of grass, Enzo crossed the rainbow bridge.

He was a teacher, a healer, a friend.  He didn't like being groomed and he hated cold water.  He liked slow trail rides and loved treats, though he was never allowed them because he was so pushy about them. 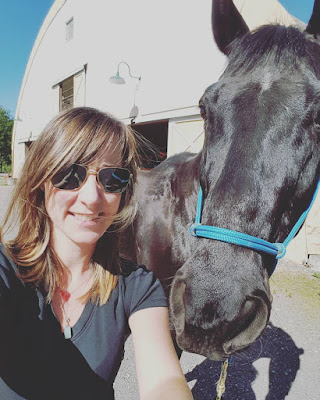 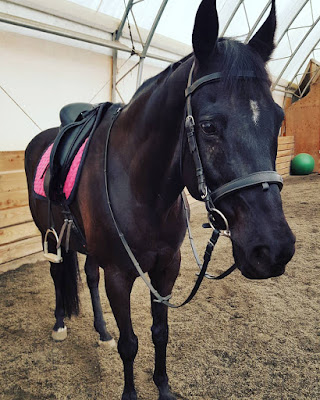 Enzo taught me to listen to the horse in a new way.  Enzo taught me that time is not always linear and that sometimes friendship is more important than being right. 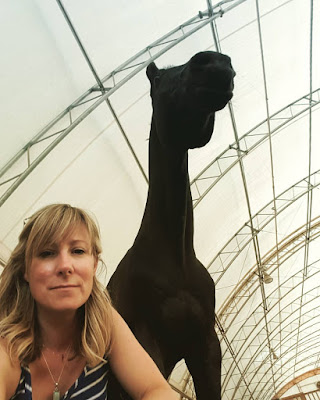 I spent his final night with him at the barn, watching over him and making sure he had plenty of hay and water.  In the morning, I let him out into the big pasture (the one he couldn't go in because of his Cushing's) and he grazed (as best he could) with his girl friend.  A friend had brought out some acrylic paint so we could leave our handprints on him.  I covered my hand in pink and placed it near his heart.  He held perfectly still while it dried.  He wouldn't let anyone else put their hands on him after that, so he carried a single pink handprint over his heart. 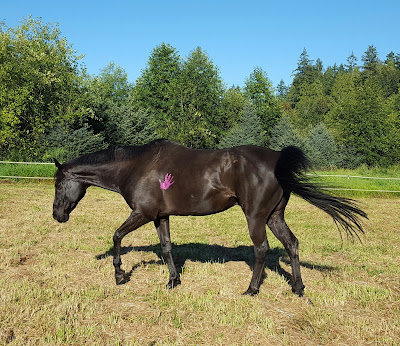 I found this poem on the internet that pretty much sums it up.  Enzo - Licorice - Black Beauty - you will be missed.

If you bury him in this spot, the secret of which you must already have,He will come to you when you call-Come to you over the far, dim pastures of death,And though you ride other, living horses through life, they shall not shy at him, nor resent his coming.For he is yours and he belongs there.People may scoff at you, who see no lightest blade of grass bent by his footfall,Who hear no nicker pitched too fine for insensitive ears.People who never really love a horse.Smile at them then, for you shall know some thing that is hidden from them,And which is well worth knowing.The only place to bury a horse is in the heart of his master
Posted by Mona Sterling at 5:03 PM 9 comments: