Licorice might be wearing a blanket, but he doesn't mess around when it comes to mud.  He had mud crusted over his entire face yesterday.  I couldn't get a good picture, but you can see the big mud chunk over his eye. 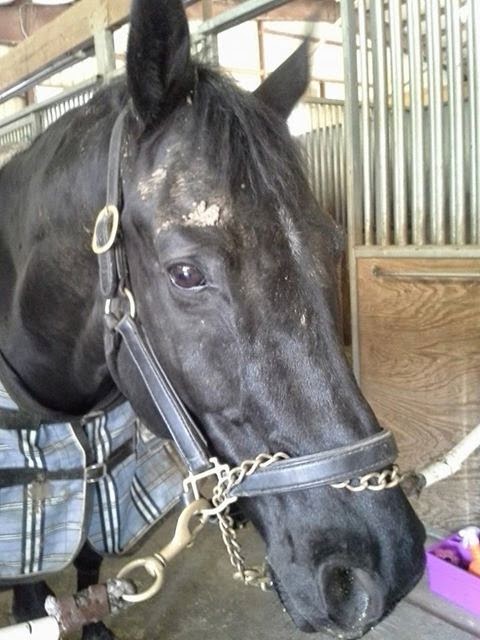 Spring in the Northwest means two things.  Rain and mud.  Then we get a few sunshine days in between where it's warm and everybody feels good.

This is a challenging time for our barn because in order for us to have grass in the late spring/early summer, we have to cut our turn outs in half.  If we don't, they are just perpetual mud pits.  So, the horses are feeling good as the weather warms up.  But they are restricted to smaller turnouts that are just not big enough for getting a good gallop in right now.

Which is why sometimes, like in my lesson last night, they feel the need to take forward to another gear.  Licorice was fine until we picked up the canter.  He stuck his nose up, grabbed the bit and tried to stretch his legs a bit.  I'm so proud of myself because although I was nervous, I simply sat deep and half halted.  I ended up having to do a full halt because he wasn't listening at all.  Then we did walk, trot transitions.

They were ugly.  It was walk and then OMIGODI'MGOINGTOTROTASFASTASICAN and then me saying STOP RIGHT NOW AND LISTEN!!!  And my trainer yelling "Hands down!  Keep your hands down!"  Because for some reason, nerves dictate that your hands should be up near your eyeballs.  Maybe they're just trying to match my shoulders, which under duress end up stuffed directly under my ears.

We just kept working at it and working at it and in the end, we had some lovely canter.  Going down the long side of the arena was not very successful, but I did manage to get him back under control after only three crazy town gallop strides.  And though I was nervous and sometimes a bit frustrated, I was never terrified.

I'm planning on going out today and letting him bomb around the arena.  Or at least lunging him if there are other people riding.  He just needs to get out and get crazy.  As spring hits and I'm stuck indoors working, I can totally relate.
Posted by Mona Sterling at 9:28 AM 1 comment: